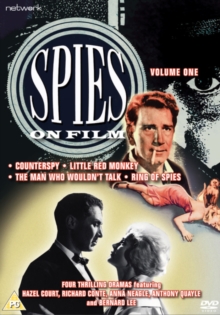 Collection of British spy thrillers. In 'Counterspy' (1953) the life of an accountant is turned upside down when he sets his eyes on some top secret documents.

Frank Manning (Dermot Walsh) is exercising his usual diligence when looking over some papers belonging to an engineering firm when a young woman alerts him to the sensitive nature of the material.

Aware that the British government and a number of sinister operators are looking for the papers, Frank realises he is in too deep when the man who is supposed to rescue him from danger turns up dead.

Can Manning extricate himself from the situation? In 'Little Red Monkey' (1955) the bodies of eminent British scientists start turning up all over London.

Russian defector and missile expert Leon Dushenko (Arnold Marlé), who is on his way to the United States, is put under the protection of Scotland Yard while they hunt down the killer.

Can they uncover the identity of the mysterious assassin?

In 'The Man Who Wouldn't Talk' (1958) Britain becomes something of a Cold War battleground when CIA agents Frank Smith (Anthony Quayle) and Eve Trent (Zsa Zsa Gabor) make their way into the country to rendezvous with a defector from the East who possesses scientific secrets.

However, the Russians are aware of the meeting and hatch a plan to thwart Frank by framing him for a murder.

Forced into a position where he can't defend himself from the crime he is accused of without compromising national security, Frank holds his silence and will have to hope that Mary Randall Q.C. (Anna Neagle) can get to the bottom of events of her own accord.

Finally, in 'Ring of Spies' (1964) Bernard Lee stars as Henry Houghton, an alcoholic Navy clerk with a chip on his shoulder who is targeted as a weak point by Soviet agents Helen and Peter Kroger (Nancy Nevinson and David Kossoff).

With Houghton posted to a secret Portland lab that specialises in submarine warfare, he is able to provide the Krogers with valuable documents in return for money.

However, when the authorities are alerted to the situation, they quickly come up with a plan to catch the spies...