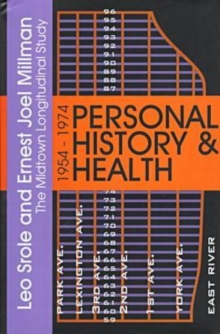 Scientists, philosophers, and storytellers often question why human beings appear to remain constant while existing in a state of change at the same tune.

Among those who explore and expose dramatic conflicts between human stability and flux, the number of behavioral scientists has remained relatively low - that is, until Leo Srole followed the progress of a large cohort of people in his Midtown Longitudinal Study.

New York's Upper East Side was the study's focus, a sociologically insular community, consisting of loosely differentiated neighborhoods, with a population of generalizable significance that transcended individual characteristics.

Midtowners, studied hi 1954 then reinterviewed in 1974, were the subjects of analysis.

After a twenty-year hiatus, Srole's eagerly awaited findings and outcomes are available.Personal History and Health by Ernest Joel Millman is a posthumous synthesis of Leo Srole's seminal behavioral study.

This book presents the principal findings of MLS - with emphasis on adult mental health predictors, not cause-and-effect relationships.

Srole used such biophysical correlates as gender and generation, mental health and history of somatic disorders, and the statistical methods of multiple correlation and regression analysis to predict average mental health.

Through this work, Srole's pioneering exploration of social age and adult mental health - in particular how they differed for the women and men of the Midtown Longitudinal Study - has been completed.

Personal History and Health is the conclusive, long-range view of those changes.These are Srole's final perspectives on mental health.

As was characteristic of him, it is not exploratory or confirmatory, nor does it declare conclusions; rather, it raises questions.

Millman offers an accessible yet sophisticated presentation of sociomedical sampling and analysis in language which may be understood by statistically unsophisticated readers, placing all of the explanations, details, figures, and tables in comprehensive statistical appendices.

This book will appeal to those in the mental health field, sociomedical scientists, and those with interest in the socioeconomic correlates of health status and/or social mobility in urban society.