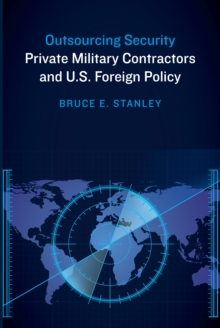 The use of private security contractors by the United States is not a recent phenomenon.

In a post-Vietnam world, as political leaders reduce their nations' military force structure, they face conflicts beyond their anticipated scope and duration.

Finding themselves faced with a decreasing supply of national troops, dwindling national defense budgets, and the ever-rising demand for boots on the ground in global conflicts and humanitarian emergencies, decision-makers are left with no choice but to legalize and legitimize the use of private military contractors or PMCs.

Foreign Policy examines the impact that bureaucratic controls and the permissiveness of security environments have on the US military's use of PMCs and analyzes the courses for growth of PMCs during the late 20th and early 21st century by examining the relationship between the increase of the private security industry and five potential explanatory variables tied to supply-and-demand theory. Using a structured, focus comparison method to examine six historical cases, including the U.S. intervention in Iraq in 1991 (Operation Desert Shield/Desert Storm), the U.S. intervention in Bosnia in 1995 (Operation Joint Endeavor), and the U.S, Intervention in Iraq in 2003 (Operations Iraqi Freedom), Outsorcing Security reveals a supply-and-demand framework consistent with the government prescribed appointment of private military contractors.

Author Bruce Edwin Stanley provides the only work that moves beyond a descriptive account of the rise of PMCs and lays out a precise theory to explain the phenomenon.