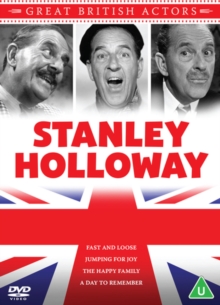 In 'Fast and Loose' (1954) Peter Wickham (Brian Reece) is due to meet his wife Barbara (June Thorburn) on a train when he encounters old flame Carol (Kay Kendall) at the station bookstall.

Peter misses the train and he and Carol set off in pursuit, only to end up spending the night together in an inhospitable hotel.

In 'Jumping for Joy' (1956), when handyman Willie Joy (Frankie Howerd) is sacked from his position at a greyhound stadium he adopts wounded hound Lindy Lou, who is due to be put down.

Willie then decides to train the dog and race her in preparation for the famous Golden Bowl competition but in order to succeed, he must stay one step ahead of a bunch of crooks and corrupt bookies.

In 'The Happy Family' (1952), set in the aftermath of WWII, Mr and Mrs Lord (Holloway and Kathleen Harrison) refuse to relocate their corner shop following a government plan to build a Festival Hall on the South Bank.

When presented with the eviction order the family barricade themselves into the shop, forcing the bailiffs to come up with another way to have them removed.

Finally, in 'A Day to Remember' (1953) a group of darts players from the same pub decide to take a day trip to France.

While some are going to France for the darts, one man plans to buy cheap watches and smuggle them back to Britain for a profit.

Jim Carver (Donald Sinden) has a more sombre intention, having fought in France during the war, he heads to a nearby cemetery to pay his respects to a fallen comrade.

Along the way he bumps into Martine (Odile Versois), a Frenchwoman he used to know.

However, even as love blossoms Jim and his fellow darts players still have a boat to catch...