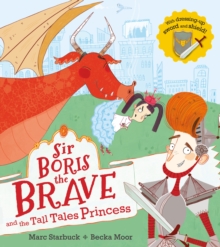 Sir Boris the Brave and the tall tales princess

By: Starbuck, Marc,  Moor, Becka(Illustrated by)

Play along with the story with your own sword and shield inside the book!Sir Boris the Brave is the boldest, bravest and busiest Knight in all the land.

Sir Boris is busy removing a particularly pongy piece of goblin poo from his shoes when an urgent message arrives from Princess Tilly Talltales.

It's an emergency! She's been captured by an ogre, told-off by a witch and there's a dragon on the loose.

But something is not quite right . . . is the princess actually telling the truth? A hilarious tale of silliness, bravery and crying wolf by debut author Marc Starbuck and illustrator Becka Moor.

The book comes with an amazing press-out sword and shield, so children can dress up, play along with the story and become their very own knight in shining armour!

Perfect for fans of the Princess Smartypants series or anyone who loves a fairytale with a twist.

Marc Starbuck has many years' experience of writing for television, working on shows such as Hollyoaks and Casualty. Originally from Manchester, Marc has lived in the Isle of Man and Spain, but now lives in Surrey with his wife and their three very noisy but inspirational children.

Becka Moor is a children's book illustrator and storyteller living in Manchester.

She studied illustration for children's publishing at Glyndwr University and has since worked on a variety of fiction books and series as well as picture books.

She rents desk space in a stunning listed building with other creative folk, has an obsession with cats and loves anything a bit on the quirky side.