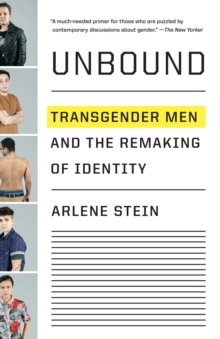 Unbound : Transgender Men and the Remaking of Identity

Award-winning sociologist Arlene Stein takes us into the lives of four strangers who find themselves together in a sun-drenched surgeon's office, having traveled to Florida from across the United States in order to masculinize their chests. Ben, Lucas, Parker, and Nadia wish to feel more comfortable in their bodies; three of them are also taking testosterone so that others recognize them as male. Following them over the course of a year, Stein shows how members of this young transgender generation, along with other gender dissidents, are refashioning their identities and challenging others' conceptions of who they are. During a time of conservative resurgence, they do so despite great personal costs.

Transgender men comprise a large, growing proportion of the trans population, yet they remain largely invisible. In this powerful, timely, and eye-opening account, Stein draws from dozens of interviews with transgender people and their friends and families, as well as with activists and medical and psychological experts.Unbounddocuments the varied ways youngertrans men see themselves and how they are changing our understanding of what it means to be male and female in America.