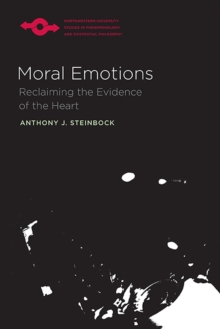 Moral emotions : reclaiming the evidence of the heart

Part of the Studies in phenomenology and existential philosophy series

Moral Emotions builds upon the philosophical theory of persons begun in Phenomenology and Mysticism and marks a new stage of phenomenology.

Moral Emotions offers a systematic account of the moral emotions, described here as pride, shame, and guilt as emotions of self-given's; repentance, hope, and despair as emotions of possibility; and trusting, loving, and humility as emotions of otherness.

The author argues these reveal basic structures of interpersonal experience.

By exhibiting their own kind of cognition and evidence, the moral emotions not only help to clarify the meaning of person, they reveal novel concepts of freedom, critique, and normativity.

As such, they are able to engage our contemporary social imaginaries at the impasse of modernity and postmodernity.