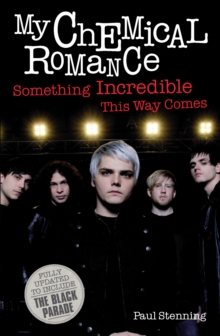 My Chemical Romance : something incredible this way comes

This is the first book of its kind on one of the world's hottest new bands.

New Jersey band My Chemical Romance have taken the music underground by storm since their incendiary debut album in 2002.

Within weeks of its release, major labels across the globe were frantically pulling out their cheque-books in an attempt to capture what is widely regarded as the world's next stadium-selling rock band in the vein of Metallica, Foo Fighters and Green Day.

Their biting lyrics, beautiful visuals and relentless touring schedules have ensured that MCR have already captured the hearts and minds of the I-Pod generation - the year 2006 will see them promoted to the very upper echelons of rock music's giants.

The first book to tell their tale, setting them in the context of the dormant US rock scene, through to their breakthrough live shows and meteoric success in 2004 and 2005.

Mixing metal with ballads, rock with pop, MCR are the next BIG band and this tells you how a bunch of introverted high school friends achieved their dream.