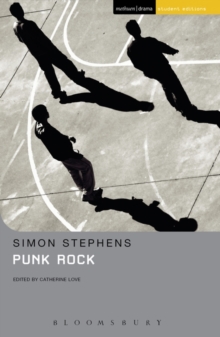 Everything human beings do finishes up bad in the end.

Everything good human beings ever make is built on something monstrous.

Nothing lasts. We certainly won't . . . William Carlisle has the world at his feet, but its weight on his shoulders.

He is intelligent, articulate and f***ed. In the library of a grammar school, William and his fellow sixth-formers are preparing for their mock A-Levels while navigating the pressures of teenage life.

They are educated and aspirational young people, but step-by-step, the dislocation, disjunction and latent aggression is revealed. Punk Rock premiered at the Lyric Hammersmith on 3 September 2009 in a co-production between Lyric Hammersmith and the Royal Exchange Theatre, Manchester.

It is published here as a Student Edition featuring commentary and notes by Catherine Love.

The ancillary material is geared at students and considers:- an introduction outlining the play's plot, character, themes, context and performance history- the full text of the play- a chronology of the playwright's life and work- a detailed introductory analysis - extensive textual notes - questions for further studyMethuen Drama Student Editions are expertly annotated texts of a wide range of plays from the modern and classic repertoires. This play includes some strong language and violent scenes.