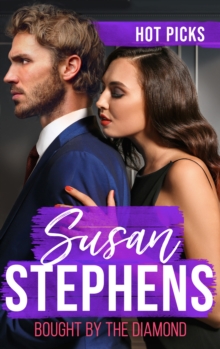 Hot picks : bought by the diamond

Desert heat With the future of the Skavanga diamond mine in jeopardy, Britt Skavanga needs an investment-fast.

She finds it in Sheikh Sharif al Kareshi. But when Britt travels to the desert kingdom of Kareshi to confront him, she finds the desert hot.

But the nights hotter... *When half his inheritance is left to his aunt's housekeeper, English orphan Rosie Clifton, Spanish aristocrat Don Xavier Del Rio is determined to claim what's rightfully his.

So when Rosie surprises him with a marriage proposal, Xavier sees a way to get everything he wants... including Rosie in his bed! *Billionaire Alexander Kosta has come to the island of Lefkis for revenge.

He will see it destroyed, as it tried to destroy him.

However, he didn't count on Ellie Mendoras, the beautiful firecracker determined to stop him...or the electrifying heat between them.