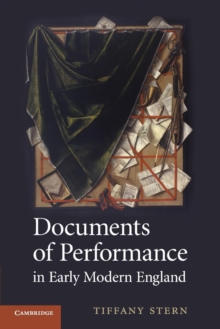 By: Stern, Tiffany (University of Oxford)

As well as 'play-makers' and 'poets', playwrights of the early modern period were known as 'play-patchers' because their texts were made from separate documents.

This book is the first to consider all the papers created by authors and theatres by the time of the opening performance, recovering types of script not previously known to have existed.

With chapters on plot-scenarios, arguments, playbills, prologues and epilogues, songs, staged scrolls, backstage-plots and parts, it shows how textually distinct production was from any single unified book. And, as performance documents were easily lost, relegated or reused, the story of a play's patchy creation also becomes the story of its co-authorship, cuts, revisions and additions.

Using a large body of fresh evidence, Documents of Performance in Early Modern England brings a wholly new reading to printed and manuscript playbooks of the Shakespearean period, redefining what a play, and what a playwright, actually is.