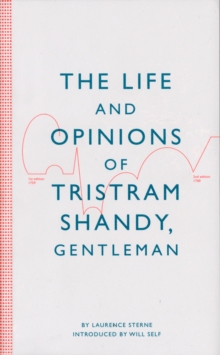 By: Sterne, Laurence,  Self, Will(Introduction by)

A lot of nonsense is written about Laurence Sterne's The Life and Opinions of Tristram Shandy, Gentleman - and that's just as well.

It would be depressing in the extreme if this triumphant tangling up of the threads of reason with the strands of linear narrative were to admit of any effective unravelling; which is as much to say, that were you to find yourself picking apart a lucid, non-discursive exposition of the novel - its themes, its techniques, its plot - you would know that you had finally gone mad.A" -Will Self When talking to people about visual writing, conversations always seem to come back to The Life and Opinions of Tristram Shandy, Gentleman (or, just Shandy, for short). The book was originally published in the late 18th century in nine volumes and is still, by far, one of the most contemporary books around.

When we say contemporary, we mean in terms of how it looks and reads.

The sad thing is, though, Shandy has long been relegated to the realm of cheap and nasty classic editions and has lost its magic and lustre along the way. When we briefed design studio, A Practice for Everyday Life, we asked them to breathe new life into the book's design, adding new visual elements, while staying faithful to the original spirit.

We also asked Will Self to introduce the book, and that he did, with typically irreverent brilliance.