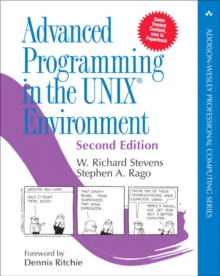 Advanced programming in the Unix environment

"This is the definitive reference book for any serious or professional UNIX systems programmer.

Rago has updated and extended the original Stevens classic while keeping true to the original." -Andrew Josey, Director, Certification, The Open Group, and Chair of the POSIX 1003.1 Working Group The same trusted content from the Second Edition, now in paperback!

For over a decade, serious C programmers have relied on one book for practical, in-depth knowledge of the programming interfaces that drive the UNIX and Linux kernels: W.

Now, Stevens' colleague Stephen Rago has thoroughly updated this classic to reflect the latest technical advances and add support for today's leading UNIX and Linux platforms. Rago carefully retains the spirit and approach that made this book a classic.

Building on Stevens' work, he begins with basic topics such as files, directories, and processes, carefully laying the groundwork for understanding more advanced techniques, such as signal handling and terminal I/O. Substantial new material includes chapters on threads and multithreaded programming, using the socket interface to drive interprocess communication (IPC), and extensive coverage of the interfaces added to the latest version of the POSIX.1 standard.

Nearly all examples have been tested on four of today's most widely used UNIX/Linux platforms: FreeBSD 5.2.1; the Linux 2.4.22 kernel; Solaris 9; and Darwin 7.4.0, the FreeBSD/Mach hybrid underlying Apple's Mac OS X 10.3. As in the first edition, you'll learn through example, including more than 10,000 lines of downloadable, ANSI C source code.

More than 400 system calls and functions are demonstrated with concise, complete programs that clearly illustrate their usage, arguments, and return values.

To tie together what you've learned, the book presents several chapter-length case studies, each fully updated for contemporary environments. Advanced Programming in the UNIX(R) Environment has helped a generation of programmers write code with exceptional power, performance, and reliability.

Now updated for today's UNIX/Linux systems, this second edition will be even more indispensable.

The title has been replaced.To check if this specific edition is still available please contact Customer Care +44(0)1482 384660 or schools.services@brownsbfs.co.uk, otherwise please click 9780321637734 to take you to the new version.