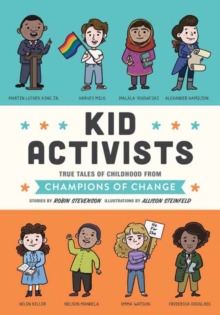 Kid Activists : True Tales of Childhood from Champions of Change

Every activist started out as a kid-and in some cases, were kids when they began their activism.

Before they became champions of African-American, women s, LGBTQ, disablity, education, labor, and civil rights, the world s most celebrated activists had regular-kid problems, just like you.

Kid Activists tells the stories of a diverse and inclusive group-including Frederick Douglass, Susan B.