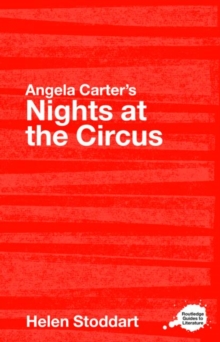 Angela Carter's Nights at the circus

Part of the Routledge Guides to Literature series

A highly original and influential work of modern British literature, Angela Carter's "Nights at the Circus" combines a fantastically creative plot with a strong political undertone.

The result is an emotive and provocative novel, which has attracted much critical attention from a range of perspectives including poststructuralism, gender studies, postmodernism and psychoanalysis.

This guide to Angela Carter's complex novel, presents: an accessible introduction to the text and contexts of "Nights at the Circus", a critical history, surveying the many interpretations of the text from publication to the present; a selection of new critical essays on the "Nights at the Circus", by Heather Johnson, Jeannette Baxter, Sarah Sceats and Helen Stoddart, providing a variety of perspectives on the novel and extending the coverage of key critical approaches identified in the survey section; cross-references between sections of the guide, in order to suggest links between texts, contexts and criticism; and, suggestions for further reading. Part of the "Routledge Guides to Literature" series, this volume is essential reading for all those beginning detailed study of "Nights at the Circus" and seeking not only a guide to the novel, but a way through the wealth of contextual and critical material that surrounds Carter's text.