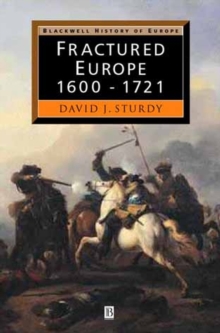 Part of the Blackwell history of Europe series

This book presents a narrative history of Europe, including Britain and Ireland, from the beginning of the seventeenth century to the Treaty of Nystadt in 1721.

It is organized around geographical regions, paying as much attention to northern and eastern Europe, as to western and southern.

The narrative is divided into two sections, supported by maps, illustrations and other supporting material.

The first covers the period from 1600 to1660 and is followed by an assessment of the themes that emerge from this section.

The conclusion reflects on the most significant themes of the post-1660 decades.

Whilst the core of the book is devoted to the political and diplomatic evolution of Europe in the seventeenth century, the author also integrates the visual arts and sciences into the discussion and assesses their influence on the wider historical development of the continent.