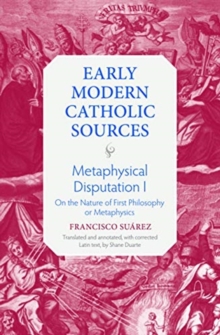 Metaphysical Disputation I : On the Nature of First Philosophy or Metaphysics

By: Suarez, Francisco,  Duarte, Shane(Translated by)

Francisco Suarez (1548-1617) was one of the most important philosophers and theologians of Early Modern Scholasticism.

Although Suarez spent most of his academic career as a professor of theology, he is better known today for his Metaphysical Disputations (Salamanca, 1597).

The present volume contains a facing-page English translation of Metaphysical Disputation I, which is introductory and devoted to the nature of metaphysics itself.

In it, Suarez first specifies this science's object and nature (Sections 1 and 2) and then discusses its unity (Section 3), its end, utility and functions (Section 4), its status as the most perfect natural science and true wisdom (Section 5), and finally the thesis that it is the science most of all desired by means of a natural appetite (Section 6).

Those interested in late scholastic conceptions of metaphysics and their influence on the better known metaphysical systems of the seventeenth century - e.g., Descartes's - will find the volume especially useful.

The Latin text contained in this volume introduces a significant number of corrections to the text of the Vives edition, the one standardly used by scholars of Suarez, and thus more faithfully reproduces the text of the first edition.

The volume also contains a lengthy introduction that provides a detailed survey of the disputation's principal claims and arguments.