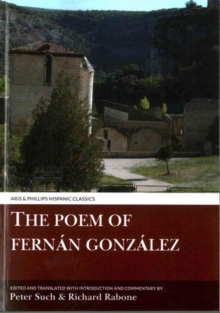 Fernan Gonzalez lived from about AD 910 to 970. The popular image of him is of a fearsome warrior who gave his people protection from their enemies (both Muslim and Christian), and a wise and respected lord who enabled them to live in security and harmony.

He was generally accepted to have played a strategic role in achieving independence for Castile and freeing it from dominance by the kingdom of Leon. The Poema de Fernan Gonzalez was composed (by an unknown author) in the mid-thirteenth century as an enduring celebration of his triumphs and account of his life and deeds.

Fact and legend have become intertwined and there is much within its stanzas that is certainly not closely based on historic facts!

This new translation is set against a detailed study of the historic context of the Castillian conflicts and a factual account of the life and achievements of Fernan Gonzalez.

The political situation of the time in which the poem was composed is also considered, as is the manner in which the'history' it espouses came to be handed down over three centuries, the possibility of a pre-existing rich oral tradition surrounding this iconic figure, and the possible sources employed by the poet in constructing the poem.