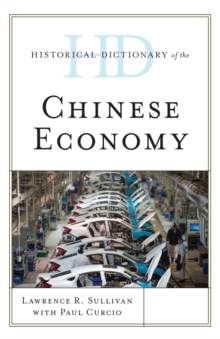 Historical dictionary of the Chinese economy

Part of the Historical Dictionaries of Asia, Oceania, and the Middle East series

Extensive attention throughout the volume is given to the historical development of the Chinese economy since the establishment of the People's Republic of China (PRC) in 1949.

Included is a review of developments during the period of central economic planning adopted from the Soviet Union (1953-1978) and in-depth information and analysis on the various policies and fundamental changes brought about in China by the inauguration of economic reforms from 1978-1979 through 2016. This book contains a chronology, an introduction, and an extensive bibliography.

The dictionary section has over 400 cross-referenced entries on critical sectors of the economy including automobiles, banking and finance, national currency, economic regulation, trade and investment, and important industries such as agriculture, computers and electronics, iron and steel, real estate, and shipping..

This book is an excellent resource for students, researchers, and anyone wanting to know more about China's economy.