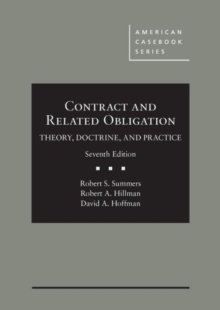 This casebook focuses on the rules and principles of contract law, as well as the lawyer's role in planning and drafting contracts. Chapter One traces a contract case from the agreement stage, to a breakdown in the parties' relationship, to a lawsuit, to a decision in the trial court, and finally to the appellate court's opinion. It includes supporting material, including the parties' agreement, a correspondence from the lawyer to the client, the complaint, a motion to dismiss, the answer, the trial judge's charge to the jury, the special verdict form, the trial judge's decision on motions after the verdict, and the appellate court opinion. These materials help students understand where cases come from and lawyers' various roles, including planning, negotiating, counseling, drafting, as well as litigating. Following the introduction, this casebook presents extensive material on the theory and practice of transactional planning and drafting, as well as additional materials from lawyers involved in the cases. The seventh edition offers comprehensive coverage of contract law theories of obligation, including bargain, promissory estoppel, unjust enrichment, and tort arising in the contract setting. This edition includes new cases and secondary sources on developing issues of contract law. In particular, the casebook introduces several new readings on the psychology underlying contractual obligation. The casebook highlights new approaches to the problem of assent over the internet, to the battle-of-the-forms, and to consideration. The casebook retains its strength in traditional subjects such as good faith, parol evidence, gap filling, conditional obligation, and breach, but the Seventh Edition contains fewer pages than earlier editions and is suitable for a 4, 5 or 6 hour course. Another goal of the new edition is to present interesting and enjoyable materials. It includes, among other things, cartoons, notes on unusual cases, and cases and problems involving public figures such as the Beatles, Elvis Presley, Aretha Franklin, and Michael Jordan.

The Seventh Edition even highlights (through a squib case) the relationship of contract law to epic of Gilgamesh, Woody Guthrie, the Declaration of Independence, Noah and The Great Flood, Game of Thrones, Star Wars Episode V: The Empire Strikes Back, Star Trek, President Obama, and Euclid's proof of the Infinity of Primes, among other references.