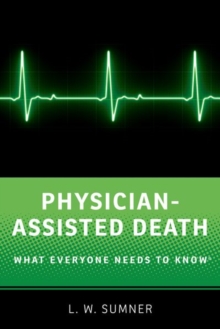 The issue of physician-assisted death is now firmly on the American public agenda. Already legal in five states, it is the subject of intense public opinion battles across the country. Driven by an increasingly aging population, and a baby boom generation just starting to enter its senior years, the issue is not going to go away anytime soon. In Physician-Assited Death L.W. Sumner equips readers with everything they need to know to take a reasoned andinformed position in this important debate.

The book provides needed context for the debate by situating physician-assisted death within the wider framework of end-of-life care and explaining why the movement to legalize it now enjoys such strong public support. It also reviews that movement's successes to date, beginning in Oregon in 1994 and now extending to eleven jurisdictions across three continents.

Like abortion, physician-assisted death is ethically controversial and the subject of passionately held opinions.

The central chapters of the book review the main arguments utilized by both sides of the controversy: on the one hand, appeals to patient autonomy and the relief of suffering, on the other the claim that taking active steps to hasten death inevitably violates the sanctity of life. The book then explores both the case in favor of legalization and the case against, focusing in the latter instance on the risk of abuse and the possibility of slippery slopes.

In this context the experience of jurisdictions that have already taken the step of legalization is carefully reviewed to see what lessons might be extracted from it. It then identifies some further issues that lie beyond the boundaries of the current debate but will have to be faced sometime down the road: euthanasiafor patients who are permanently unconscious or have become seriously demented and for severely compromised newborns. The book concludes by considering the various possible routes to legalization, both political and judicial. Readers will then be prepared to decide for themselves just where they stand when they confront the issue both in their own jurisdiction and in their own lives.