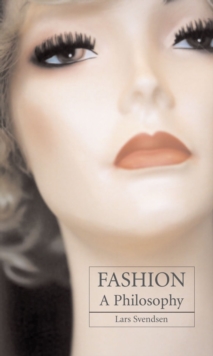 Fashion is a combination of conformity and individual choices.

The development of fashion is central to an idea of modernity, insofar as it represents a break with tradition.

The progressively short cycles of fashion exist alongside the contemporary idea of personal identity.

Svendsen overturns provocatively many dearly-held beliefs of the fashion industry and its promoters: that body modification and interest in plastic surgery and the naked body are aspects of a new consumerism and that fashion is indeed 'fashionable' - the paradox is that art has continued to be in fashion, while fashion would basically seem to have gone out of fashion when it is to be considered as art.

In "Fashion: A Philosophy", Lars Svendsen provides an accessible analysis of fashion as a historical phenomenon and as a philosophy of taste.

Quoting a wide range of thinkers, from Adam Smith to Roland Barthes, he examines the slippery meaning of fashion, exploring the term in its widest sense but placing fashion in clothing at centre stage.In so doing, Svendsen highlights the importance of transient fashions in the arts, politics and philosophy and the interrelationships between fashion, modernity and human identity.