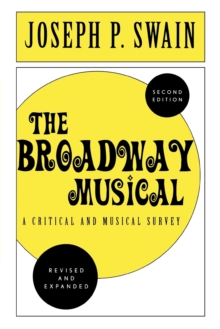 The broadway musical : a critical and musical survey

This new edition is also replete with a never before seen essay on Les Mis-rables/I.

An expanded epilogue offers insight into the phenomena behind Miss Saigon/I and Phantom of the Opera/I, megamusicals which seemingly popularized the Broadway tradition.