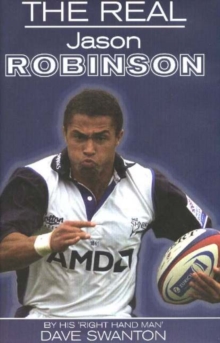 As the scorer of the only try in Englands historic World Cup victory in 2003, Jason Robinsons career has scaled the peaks.

Yet while his career has been statistically impressive -- with 37 tries in 102 starts for Sale, 22 tries in his 35 England appearances and a remarkable 11 tries in 10 Lions appearances -- it is perhaps for his character and personal achievements that Jason is best loved.

As Englands first black Rugby Union captain. Jason has given what has in the past been regarded as a stuffy, public school game a much wider profile.

Away from the pitch, Jasons conversion from bad lad to religious family man has made him a role model and, while this part of his career has been well-chronicled little is known about the man behind the achievements -- his sense of fun, love of practical jokes and fast food in equal measure. Author Dave Swanton delves behind the public persona of Billy Whizz, a nickname he acquired at Wigan in his Rugby League days.

When Dave later joined Wigan as PR man in 1998 their careers became inextricably linked. Their paths continued to be intertwined when Jason moved across to Rugby Union with Sale Sharks in 2000, shortly after Swanny became Media and PR Manager.

For the last eight years Jason Robinson has called him his right hand man. Together Swanny and Robbo have fuelled the rise of Sale from suburban Rugby Union club to a Premiership team challenging for European honours.

When they joined, Sale were still adjusting to the demands of the newly professionalised game, playing before crowds of 3,000 at the quiet bonhomie of their Heywood Road home. 5 years on, the club groundshare with Stockport County, have seen their average gate rise to nearly 10,000 and regularly challenge for the top European and domestic honours.

Jasons subsequent disappointments with the England and Lions teams are also documented and only serve to throw into sharp relief his previous achievements. Yet Jason remains most famous for the dazzling side-steps that form the basis of his elusive running style.

As Neil Squires of the Daily Express discovered when invited to tackle a rampant Robbo in training, One moment a rapidly approaching Jason Robinson is filling my vision, the next he is nowhere to be seen. There is no hole in the ground, no scorched grass, not even a sound as he vanishes.

Its like tackling a gust of wind. Robinsons step, Rugbys most watchable magic trick, is even more jaw dropping from the pitch than the stands.

The balance and acceleration belong to one of the most highly tuned sports cars, the change of direction to a zigzag.