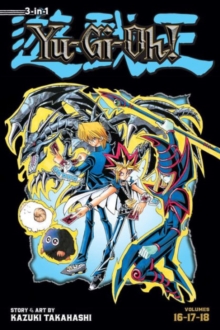 Tenth-grader Yugi always had his head in some game--until he solved the Millennium Puzzle, an Egyptian artifact containing the spirit of a master gambler from the age of the pharoahs!

Possessed by the puzzle, Yugi becomes Yu-Gi-Oh, the King of Games, and challenges evildoers to the Shadow Games...weird games with high stakes and high risks!

The world's greatest duelists are in town for the Battle City tournament, but a mysterious group is stalking the tournament to steal the most valuable cards!

The Rare Hunters are more than just thieves-they're pawns of the mysterious Marik, a deadly duelist from Egypt who already possesses two of the three most powerful cards in the world.

To defeat them, Yugi has to find a way to beat Exodia, the world's most unbeatable combo!

Then, Yugi must must win a game of Dungeon Dice Monsters or lose the Millennium Puzzle forever!