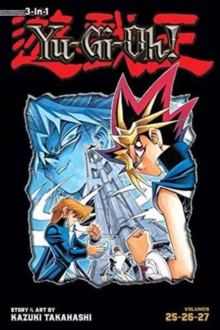 Tenth-grader Yugi always had his head in some game-until he solved the Millennium Puzzle, an Egyptian artifact containing the spirit of a master gambler from the age of the pharoahs!

Possessed by the puzzle, Yugi becomes Yu-Gi-Oh, the King of Games, and challenges evildoers to the Shadow Games...weird games with high stakes and high risks!

The battles wage on, but not without some major competition-and consequences-for the duelists.

Locked in combat with Rishid, Jonouchi is shocked when Rishid summons the terrifying Sun Dragon Ra!

Then Kaiba faces the mysterious Ishizu Ishtar, who possesses the Millennium Tauk, which gives her the power to see the future!

Kaiba's only hope may lie in the sands of time, but is he ready to learn the horrifying secret origin of the mad heir of the Tomb Guardians?