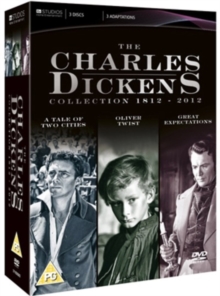 In 'A Tale of Two Cities' (1958), Sydney Carton (Dirk Bogarde) is a frivolous London barrister, hopelessly in love with Lucie (Dorothy Tutin), even after she marries Charles Darnay (Paul Guers), who is descended from an unpleasant French aristocrat.

Darnay is lured back to France as the Revolution gets into swing where he is arrested and awaits execution.

Sydney, seeing Lucie's despair, goes to France, frees Charles and takes his place in the queue for the guillotine.

In 'Oliver Twist' (1948), Oliver (John Howard Davis) is a young orphan boy who is expelled from the workhouse run by Mr Bumble (Francis L.

Sullivan). After becoming an apprentice to an undertaker Oliver decides to run away to London, only to meet the Artful Dodger (Anthony Newley) and fall amongst his gang of thieves, led by the scheming Fagin (Alec Guinness).

Finally, in 'Great Expectations' (1946), orphan Pip (Anthony Wager) befriends an escaped convict before being elevated to higher circles as the companion of mad Miss Havisham (Martita Hunt) and her niece, Estella (Jean Simmons), with whom the boy quickly falls in love.

When the adult Pip (John Mills) discovers a mysterious benefactor has paved the way for him to become a gentleman, he assumes Miss Havisham is responsible.