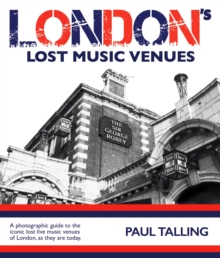 A photographic guide to the iconic lost live music venues of London, as they are today.

Did you get tinnitus from too many gigs at The Bull & Gate?

Spent your youth propping up the bar at The Marquee Club? Or witness early gigs by rock legends on Eel Pie Island?

Then this book is for you! Paul Talling takes a look at some of London's much missed music venues from the post-war period to the present day.

Featuring photos, adverts & tickets, this book is a portal to a less homogenised London, taking you back to the city's halcyon days of jazz, blues, folk, rock, punk, indie and more.

Paul Talling, author of Derelict London and London's Lost Rivers (Random House) turns his attention to the lost and derelict music venues of London, focusing on the smaller, club-sized venues.

This book takes a look at some of the iconic venues of the last 60 years with images, flyers and modern day photos of what they are now.

Venues include The Marquee Club, The Vortex, The Roxy, The Falcon, The Bull & Gat