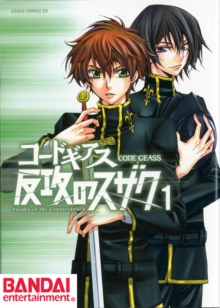 Suzaku of Japan and Lelouch of Brittania were boyhood friends.

Then the Holy Empire of Britannia invaded Japan and conquered the country, declaring it was now known as 'Area 11'.

Freedom was taken away and the proud Japanese people became known as Elevens.

Seven years later, Lelouch and Suzaku, now honorary Brittanians, are in high school, resigned to the fact that they can do little to change the world around them.

That is until he meets a mysterious girl that gives him the power to control people's minds - the power of Geass!

He dons a mask and becomes the ruthless terrorist known only as Zero.

But what of Suzaku? This manga series focuses on Suzaku's side of the story, depicting events from the Geass story previously unknown with plenty of shocking twists and surprises!