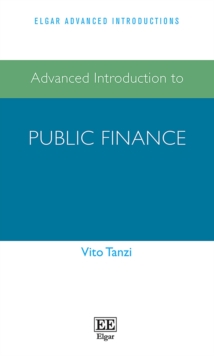 The public finance branch of economics has seen a great deal of change in prevailing attitudes regarding the role of the market and the role of government in countries with democratic institutions and market economies.

Different functions have been added, over the past century, and especially after World War II, to the role that the government should play.

The laissez faire ideology of the past, that minimized the government role, was progressively abandoned until the last two decades of the 20th century, when there was an attempt to reduce the ambitious role that the government had assumed, and to give a growing role back to the market.

This book explains how changes in both the market and the government have made public finance a more challenging, interesting and at times frustrating branch of economics.

It provides a cosmopolitan perspective and details the part that historical developments have played in shaping modern views.

The author explores the real life, practical nature of public finance and de-emphasizes the role of armchair theorizing by focusing on real issues that are seen from a community rather than an individualistic perspective. The Advanced Introduction to Public Finance offers a fresh look at the field for students, researchers and policymakers in economics, public administration, taxation, policy and economic history.