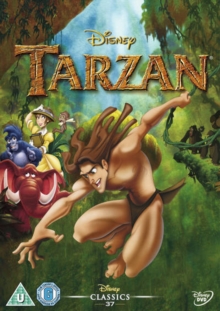 Tarzan (voiced by Tony Goldwyn) is a human who was taken in and raised by gorilla Kala (Glenn Close) when his parents were killed by Sabor the leopard.

Now a grown male, Tarzan has never been fully accepted by Kala's husband Kerchak (Lance Henriksen), the head of the tribe, but has female gorilla Terk and elephant Trantor for friends.

When explorer Professor Porter (Nigel Hawthorne) arrives in the jungle with his daughter Jane (Minnie Driver) and adventurer Clayton (Brian Blessed), Tarzan discovers his human heritage for the first time, gradually learning how to speak and spending time at the visitors' encampment.

However, although Porter merely wishes to study the gorillas, Clayton secretly plans to capture them and take them back to England, and tries to trick Tarzan into leading him to the tribe.