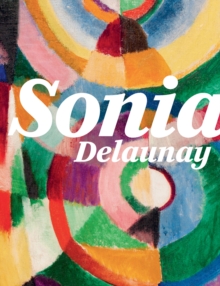 Sonia Delaunay (1885 - 1979) is one of the most important female artists of the early twentieth century, whose contribution to the European avant-garde was fundamental.

Russian-born, she moved to Paris in 1906 where she studied at the Academie de la Palette.

Her early work was infl uenced by the bold Fauvist paintings of Matisse, Gauguin and Van Gogh among others.

Shifting her interest to abstraction, she celebrated the modern world and urban life, exploring ideas of colour theory together with her husband Robert Delaunay.

She also collaborated with artists and poets such as Guillaume Apollinaire and Blaise Cendrars with whom she created the acclaimed book Prose on the Transsiberian Railway and of Little Jehanne of France.

After spending time in Spain and Portugal during the First World War, Delaunay returned to Paris in the 1920s where she translated her experiments in painting into the realm of fashion.

She collaborated with the Metz & Co textile department in Amsterdam and Liberty in London and also produced individual items of clothing under commission.

Her interest in fashion expanded into theatre and cinema, for which she created costumes and designs for film sets. During the Second World War and soon after, she participated in the creation of the Salon des Realites Nouvelles (1939) and developed her interest in different media, creating mosaics, tapestries and lithographs.

In the same period, her paintings and gouaches evoked a renewed interest in abstraction and colour, marking her seminal role in the development of postwar abstract and applied art.

With over 250 illustrations and ground-breaking essays by prominent curators and art historians, this publication seeks to throw new light on the multifaceted work of this prolifi c artist.