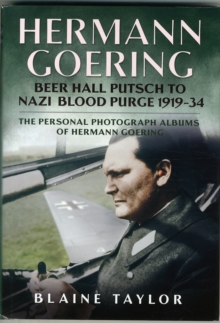 Part of the The Personal Photograph Albums of Hermann Goering series

In 1919, Hermann Goering went to Denmark as a stunt flyer, then on to Sweden to fly passengers, one of whom introduced the daredevil to his future first wife, a then married Swedish Countess; they scandalized Stockholm.

Goering joined the Nazi Party, as commander of the early SA Stormtroopers.

In the celebrated Beer Hall Putsch of 1923, Goering was severely wounded, and fled.

Thus began a four-year exile in which Goering became a practicing morphine addict in Austria, Italy, and Sweden, and was committed to an insane asylum in a straitjacket.

Goering returned to Germany under a political amnesty, and blackmailed Hitler into putting him up for election to the Reichstag as a Nazi candidate in 1928.

He won, and four years later, was elected its President.

Taking over Prussia's police force-and during the upheaval of the Reichstag fire and trial-Goering ruthlessly smashed all non-Nazi parties.

Then came the inter-Party Blood Purge of the Night of the Long Knives of 30 June 1934 that Goering directed in Berlin.

This cemented his position as the Fuhrer's second-in-command, after having been declared insane!