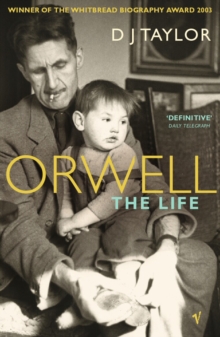 In the last half-century, George Orwell's "Animal Farm" and "Nineteen Eighty-Four" have sold over 40 million copies.

The adjective 'Orwellian' is now a byword for a particular way of thinking about life, literature and language, while Orwell himself has become one of the most potent and symbolic figures in western political thought.

Despite this iconic status, Orwell (born Eric Blair) remains an enigma: a passionate democratic socialist steeped in the worst illusions of his Edwardian boyhood, a bitter critic of totalitarianism who concealed a pronounced authoritarian streak, a supporter of social equality who promptly put his adoptive son down for Eton.

His progress through the literary world of the 1930s and 40s was characterised by the myths he built around himself.

Whether as a reluctant servant of the Raj in 1920s Burma, a mock down-and-out in inter-war England or a Republican volunteer in Spain, he fashioned an image that was often sharply at odds with the real circumstances of his life.

Drawing on a mass of previously unseen material, including interviews with friends and people who knew him in his years of obscurity, D.

J. Taylor offers a strikingly human portrait of the writer too often embalmed as a secular saint.

Here is a man who, for all his outward unworldliness, effectively stage-managed his own life; who combined chilling detachment with warmth and gentleness, disillusionment with hope; who battled through illness to produce two of the greatest masterpieces of the twentieth century.

Moving and revealing, Taylor's "Orwell" is the biography we have all been waiting for, as vibrant, powerful and resonant as its extraordinary hero.