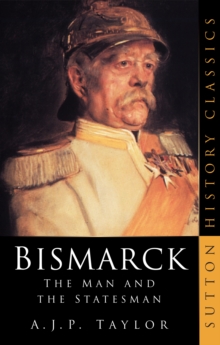 Bismarck : the man and the statesman

This is a study of one of the most influential figures in Germany's history.

Treating Bismarck as a man of his time, A.J.P. Taylor surveys his political policy and actions as well as investigating the psychology of a man whose life and achievements continue to be controversial.

Bismarck has been made the symbol of many causes since his death in 1898.

Contemporaries saw him as the creator of national Germany.

During World War I he was branded as the man of "blood and iron" and accused of teaching the Germans to worship power.

Under the Weimar Republic he became the apostle of conservatism, opposing the advance of democracy.

Under Hitler he was transformed into the great exponent of moderation and, in foreign affairs, of good relations with Russia.

Now again historians argue whether Bismarck led Germany on the wrong path or indeed what path he took at all.