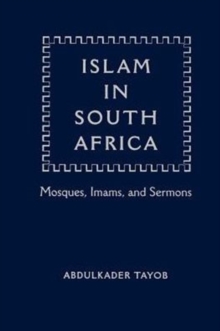 Part of the Religions of Africa series

J. Hackett, University of TennesseeUntil now, researchers on Islam in Africa have paid little attention to the continent's southern tip.

In the first English-language study of the subject, Abdulkader Tayob examines the Islamic institutions of South Africa, tracing their development over the last 200 years, from the first European colony in the 17th century through British colonialism and apartheid.

Beyond the institutions, Tayob also examines the sermons of South Africa's Imams as expressions of the country's Islamic faith.

He argues that the sermons function both as symbols of the Word of God and as venues for contextual interpretations of the Qu'ran.

The unusual character of South Africa, he maintains, has not only shaped the country's Islamic institutions but has also helped to define its Muslim identity.

For outsiders to either Islam or South Africa, Tayob interprets the symbols of Islam, the overly politicized dimensions of South African Islamic life, and the sacred spaces within each community.

Writing as an "insider" to the faith, he also reveals a rich history of Muslim institutions previously inaccessible to non-Moslems. Abdulkader I. Tayob is associate professor in the Department of Religious Studies at the University of Cape Town, where he teaches Islamic studies and the history of religions.

He is the author of Islamic Resurgence in South Africa: The Muslim Youth Movement.