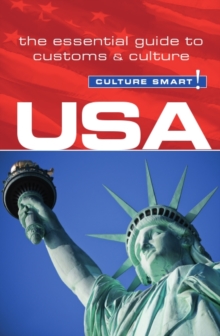 Part of the Culture Smart! series

Who can afford not to understand the USA? Many facets of American life have been embraced around the world, yet the sense of "just like in the movies" familiarity that first-time visitors often feel can be misleading.

Underneath the gleaming smile of American popular culture lies a rich and complex society that brims with contrasts and contradictions.

It is a culture of rugged individualism, of go-getters, of high-tech high achievers.

At the same time it is a deeply religious country with a quiet devotion to church and charitable works.

This updated new edition of Culture Smart! USA also reveals a society in transition. The USA responded to the 9/11 attacks by embarking on two overseas wars, while at home the subprime mortgage crisis rippled through the economy, bringing the first African-American president to power during the biggest recession since the 1920s.

In an increasingly polarized political and cultural climate, and with an ever widening gap between the haves and the have-nots, the rise of the social media has given more Americans a voice, from the Tea Party on the right to the Occupy Wall Street movement on the left.

As Americans wake up to a changing world where their global economic dominance is no longer assured, attitudes and behavior are being challenged and reassessed across the land.

Culture Smart! USA takes you on a tour of the core influences and ideals that have shaped this great country and have driven the behavior and attitudes found on Main Street and in the workplace.

It looks at Americans at work, at home, and at play, and provides the visitor with an up-to-date cultural "road map" of this dynamic, multifaceted society.