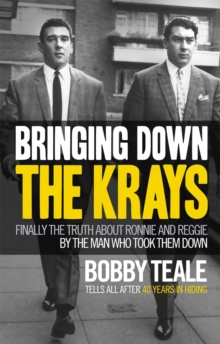 Bringing down the Krays : finally the truth about Ronnie and Reggie by the man who took them down

I was now very aware of Ronnie's "dreaded list". The list contained the names of people he wanted to kill; that he was going to kill.

As soon as I saw it, I knew something had to be done.

The Krays were out of control. They had the East End buttoned up too tight and someone had to undo it.

Slowly, I realised that someone had to be me...' Bobby Teale and his brothers, David and Alfie, were the three men the Kray twins trusted most.

They weren't in the Firm, they were closer than that.

They were old family friends, confidants, companions...But then things changed.

Unknown to his brothers, he became a police informer; risking not just his own life but those of the people dearest to him too.

Using the codename 'Phillips', he was forced to live on his wits, feeding back information to Scotland Yard.

With bent cops on their side the Krays knew they had a grass in their midst, but before they could flush him out, Bobby's evidence saw the gangsters get locked up for life.

Bobby fled the country, but now 40 years on he's back. And he wants to set the record straight. With the help of his brothers, the man brave enough to stand up to the Krays has rewritten history as we know it; dispelling the myths and tearing apart the gangsters' glamorous veneer to reveal the true, sadistic nature of Ronnie and Reggie Kray and the violent crimes they committed.

Crammed full of explosive, new revelations, Bringing Down The Krays is the last great untold story of Britain's most infamous crime family.