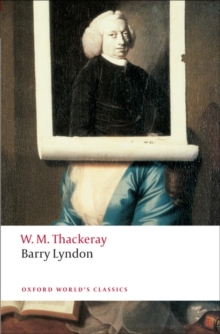 The memoirs of Barry Lyndon, Esq.

Set in the second half of the eighteenth century, Barry Lyndon is the fictional autobiography of an adventurer and rogue whom the reader is led to distrust from the very beginning. Born into the petty Irish gentry, and outmanoeuvred in his first love-affair, a ruined Barry joins the British army. After service in Germany he deserts and, after a brief spell as a spy, pursues the career of a gambler in the dissolute clubs and courts of Europe. In adetermined effort to enter fashionable society he marries a titled heiress but finds he has met his match.

First published in 1844, Barry Lyndon is Thackeray's earliest substantial novel and in some ways his most original, reflecting his views of the true art of fiction: to represent a subject, however unpleasant, with accuracy and wit, and not to moralize.

The text is that of George Sainsbury's 1908 Oxford edition which restores passages cut when the novel was revised in 1856.