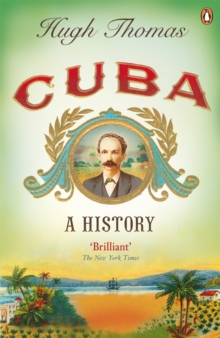 From award-winning historian Hugh Thomas, Cuba: A History is the essential work for understanding one of the most fascinating and controversial countries in the world. Hugh Thomas's acclaimed book explores the whole sweep of Cuban history from the British capture of Havana in 1762 through the years of Spanish and United States domination, down to the twentieth century and the extraordinary revolution of Fidel Castro. Throughout this period of over two hundred years, Hugh Thomas analyses the political, economic and social events that have shaped Cuban history with extraordinary insight and panache, covering subjects ranging from sugar, tobacco and education to slavery, war and occupation. Encyclopaedic in range and breathtaking in execution, Cuba is surely one of the seminal works of world history. 'An astonishing feat ... the author does more to explain the phenomenon of Fidel's rise to power than anybody else has done so far' Spectator 'Brilliant' The New York Times 'Immensely readable.

Thomas's notion of history's scope is generous, for he has not limited himself to telling old political and military events; he describes Cuban culture at all stages ... not merely accessible but absorbing. His language is witty but never mocking, crisp but never harsh' New Yorker 'Thomas seems to have talked to everybody not dead or in jail, and read everything.

He is scrupulously fair' Time Hugh Thomas is the author of, among other books, The Spanish Civil War (1962), which won the Somerset Maugham Award, Cuba: The Pursuit of Freedom (1971), An Unfinished History of the World (1979), and the first two volumes of his Spanish Empire trilogy, Rivers of Gold (2003) and The Golden Age (2010).