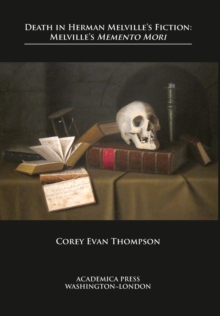 Literary critics have aptly noted that death is arguably the most frequent topic, theme, or occurrence in all of American literature.

Naturally, the works of such authors as Charles Brockden Brown, Nathaniel Hawthorne, Edgar Allan Poe, Kate Chopin, Shirley Jackson, and Stephen King, among countless others, go to great lengths to support this observation; however, the renowned nineteenth-century American literary giant Herman Melville, most famous as the author of Moby Dick, has been frequently overlooked.

In this book, seasoned literary scholar Corey Evan Thompson seeks to remedy this oversight. Death in Herman Melville's Fiction: Melville's "Memento Mori" is the first full-length study to examine the ubiquity and implications of death in Melville's prose fiction.

As Thompson shows, death occurs in all of Melville's novels and much of his shorter fiction by various means.

Not only is death a frequent occurrence in Melville's fiction, but his characters die regardless of age, health, social status, or moral character.

Drawing from his father's death, Melville's fiction provides his readers with the difficult realization that it is the inevitable destination for everyone who is on this journey called life.