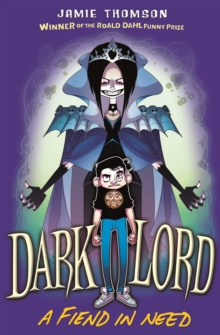 A fiend in need

A fiend in need

Part of the Dark Lord series

Dirk Lloyd, the Dark Lord trapped in the body of a weedy schoolboy, returns in another darkly hilarious adventure...

Brilliantly funny and subversive, this is the Funny Prize-winning Jamie Thomson at his best. Sooz, a 13 yr old girl from Surrey has become the Dark Mistress of Dirk's other worldly kingdom, the Darklands.

Thanks to the Ring of Power given to her by Dirk, his minions recognise her as their ruler.

Sooz immediately sets about redecorating Dirk's Dark Tower to the taste of a young girl.

But Sooz has to face her toughest challenge when an army of fanatical paladins and orcs gather to march against her.

Despite their centuries of hostility to each other, they prefer to form an alliance rather than accept Sooz's new regime. And what of Dirk? He continues on slaving away at school, plotting ways to rescue Sooz.

Eventually he is able to advise her on life in the Darklands and Sooz is able to hold back the fanatical paladins.