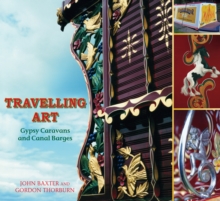 The hey-day of the British gypsy caravan was short, only about 70 years, during which period it grew from a simple utility vehicle, blossomed and flourished as a mobile work of art, then disappeared from common sight.

These caravans were masterpieces of woodcraft and design, and the best of them cost as much as a small house.

Unlike any small house, almost half the cost was in the decoration. This beautifully illustrated book presents the different types of caravan and the great variety of art which was carved and painted upon them and their brothers-in-transport, the old narrowboats.

While there were certain rules and conventions of style, the decoration on and in all the types was ultimately governed only by how much money could be spent.

The caravan in particular was the supreme status symbol among travelling people and its art the prime means for expressing where one stood in the world.