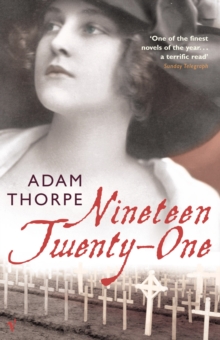 It is the freakishly hot, drought summer of 1921; dust storms in London, parched and cracking earth, autumn tints in July.

Holed up in a cottage in the Chilterns, a young writer strives to write the first great novel of the War, impelled by his own suffering.

Outward events and inner crises deflect him from his purpose, and love intervenes in the form of two very different women.

A visit to the hallucinatory wreckage of post-war Flanders brings strange repercussions in its wake.

Everyone is in some way damaged by the terrible years of the war; in what sense can art be made out of such horror?

Adam Thorpe's novel seeks to touch the marrow of this jazz and death-haunted period, which was ironically the most excitingly creative period of the last century.

In a language deeply soaked in the time and by means of a beguiling story which gradually haunts its own process, "Nineteen Twenty-One" vividly recreates the year in which "The Waste Land" was written, as well as offering a bright mirror to the inner and outer complexities of our own troubled times.