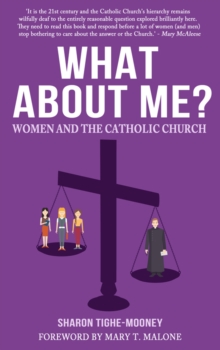 What about me? : women and the Catholic church

One woman's investigation of the role of women in the Christian Church since its inception, as she counters the Roman Catholic church's argument for excluding them from the priesthoodDetails the gradual exclusion of women from positions of power as the Roman Catholic Church evolved. Accessible account from the viewpoint of an ordinary woman in the Church. Cover quotes from Mary McAleese, Fr. Tony Flannery and Mary T. Malone. What About Me? Women and the Catholic Church is an exploration by an ordinary woman, born into the Catholic faith of the arguments given to exclude her from ministry.

It is a personal quest to shed light on the story of women in the Christian movement from its earliest days to the present.

The objective of the book is to explore, inform, speculate and question and it should appeal to a general audience.

The context of the book is the 2010 move by Pope Benedict XVI to elevate the 'crime' of ordaining women to Catholic ministry and the subsequent censoring of religious personnel who questioned this edict.

This book details a quest to find out where the strong antipathy towards women in the Roman Catholic Church's institutional mindset comes from.