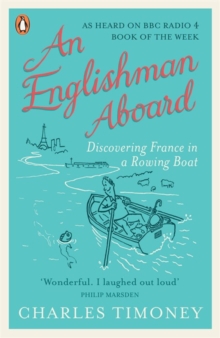 An Englishman aboard : discovering France in a rowing boat

From the author of Pardon My French and A Certain Je Ne Sais Quoi, this is the charming and hilariously funny story of one man's attempt to travel the entire length of the Seine by boatWhen Charles shows his friends the rowing boat he has spent the last six months building, he little realises the adventures that lie ahead.

Several glasses of champagne later (it is New Year's Eve), he finds himself betting he will travel the entire length of the Seine from source to the sea in the next year and discover the true France.

But the reality proves somewhat more difficult than he had expected.

As Charles sets sail into an unvarnished France on a variety of craft from steamers to police patrol boats to inflatables, he encounters truffle-thieving terriers and obsessive fishermen, grapples with strong rapids and stubborn cattle, and is nearly destroyed by a cheese so smelly it comes with its own health warning. This is the charming and often hilarious story of Charles's Quixotic quest - and the most unique guide to the true France that you will find. Reviews:'There are new year's resolutions and then there are those rash decisions that come after the last bottle has been drunk on the last night of the year.

The journey down the Seine that Charles Timoney describes in his third book about France stemmed from the latter ... a charming story of life along the river ... that lingers in the mind' Sunday Times (Books of the Month)'A wonderful view of France as seen from the water, and through the eyes of a genuinely funny writer - I laughed out loud' Philip Marsden (author of The Levelling Sea)About the author:When Charles Timoney and his French wife were both made redundant in the same week, they decided to try living in France for a year or so.

It proved much harder than expected. Charles's O level in French was little help when everyone around him consistently used a wide variety of impenetrable slang and persisted in the annoying habit of talking about things he had never heard of.

But they stayed. Two decades and two thoroughly French children later, An Englishman Aboard is Charles's third book on his experience of France, the French people and the French language: Pardon My French: Unleash Your Inner Gaul, A Certain Je Ne Sais Quoi: The Ideal Guide to Sounding, Acting and Shrugging Like the French and now An Englishman Aboard.