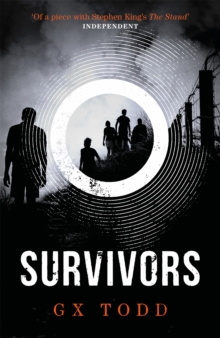 'Of a piece with Stephen King's The Stand' INDEPENDENT'Lee Child channelling Stephen King - but the vision is unique' DAILY MAIL'Sharp... and gripping, and we can't wait to explore this harsh world further' SCIFINOW'Compelling, suspenseful and altogether extraordinary' LEE CHILDThere are two kinds of people in this world.

Those who hear voices, and those who want to silence them. Pilgrim is a man with a past he can't remember. When he wakes alone in a shallow grave, there is a voice in his head that doesn't belong to him.

It explains who he is and what he's done. It tells him he has one purpose: to find a girl named Lacey. As Pilgrim is drawn north to Missouri in search of Lacey, he must also travel back to where it all began - to those he left behind.

War is coming, and Pilgrim is going to need all the allies he can get. Survivors is the third book in the highly acclaimed Voices series, where the line between Good and Evil is wearing thin.

Readers can't get enough of the electrifying world of G X Todd:'A genius debut that grips you from start to finish''Five stars isn't enough!''Takes the story to a whole other level.

Can't wait to see what happens next!''Amazing, thrilling, emotional''A modern classic''Different, tense and well-plotted''It's now 5:36am and I have given up on sleep!''I need to talk to you about a really great book'