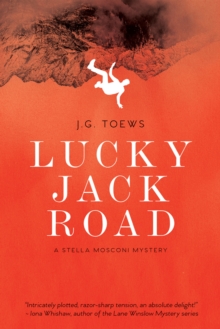 When Stella Mosconi left the small mountain city of Nelson, B.C. straight out of high school, she hoped she had seen the last of Jack Ballard.

A teenage fling between the two ended with a scary incident that left a fear that still lingers some twenty years later when Stella returns to her hometown.

Now settled with her family and hitting her stride as a reporter for the local paper, Stella has been flying under Ballards radar.

But once her cover is blown, the former pro mountain biker, an icon in Nelson, wont give her any peace.

Then on the morning after celebrating his fortieth birthday with a big party, Ballard is found dead, his body discovered beneath the lookout of a popular hiking trail.

Stella doesnt believe the former elite athlete would simply have stumbled over the edge.

Too many circumstances surrounding the incident seem off-kilter.

A teenager Stella once helped put into youth custody had shown up uninvited at Ballards party.

The witness who found his body is building a shrine to him. And Ballards pregnant fiancee hostile to Stella from the start is going after her with a vengeance now that hes gone.

Once again, the intrepid reporter teams up with Sergeant Ben McKean to dig into the case while the pair try to skirt a mutual attraction.

Grasping at leads, Ben isnt even certain a crime has been committed.

But Stella is ready to put everything on the line to unravel the enigma that was Jack Ballard.

Lucky Jack Road is the sequel to Give Out Creek, a finalist for the 2019 Lefty Award for Best Debut Mystery Novel.