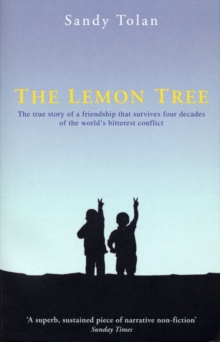 The lemon tree : the true story of a friendship spanning four decades of Israeli-Palestinian conflict

In the summer of 1967, not long after the Six Day War, three young Palestinian men ventured into the town of Ramla in Israel.

They were cousins, on a pilgrimage to see their childhood homes, from which they and their families had been driven out nearly twenty years earlier.

One cousin had the door slammed in his face, one found that his old house had been converted into a school.

But the third, Bashir, was met at the door by a young woman named Dalia, who invited him in... This poignant encounter is the starting point for the story of two families - one Arab, one Jewish - which spans the fraught modern history of the region.

In the lemon tree his father planted in the backyard of his childhood home, Bashir sees a symbol of occupation; Dalia, who arrived in 1948 as an infant with her family, as a fugitive from Bulgaria, sees hope for a people devastated by the Holocaust.

Both are inevitably swept up in the fates of their people and the stories of their lives form a microcosm of more than half a century of Israeli-Palestinian history. What began as a simple meeting between two young people grew into a dialogue lasting four decades.

The Lemon Tree offers a much needed human perspective on this seemingly intractable conflict and reminds us not only of all that is at stake, but also of all that is possible.