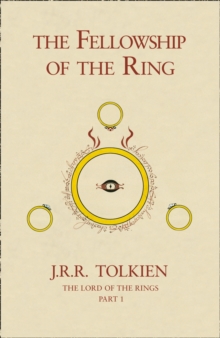 The fellowship of the ring

The fellowship of the ring

Part of the The Lord of the Rings ; pt. 1 series

The first volume of The Lord of the Rings, now featuring Tolkien's original unused dust-jacket design.

Includes special packaging and the definitive edition of the text with fold-out map and colour plate section.

Sauron, the Dark Lord, has gathered to him all the Rings of Power - the means by which he intends to rule Middle-earth.

All he lacks in his plans for dominion is the One Ring - the ring that rules them all - which has fallen into the hands of the hobbit, Bilbo Baggins.

In a sleepy village in the Shire, young Frodo Baggins finds himself faced with an immense task, as his elderly cousin Bilbo entrusts the Ring to his care.

Frodo must leave his home and make a perilous journey across Middle-earth to the Cracks of Doom, there to destroy the Ring and foil the Dark Lord in his evil purpose.

Now, to celebrate the 50th anniversary of its first publication, the text has been fully restored with almost 400 corrections - with the full co-operation of Christopher Tolkien - making it the definitive version, and as close as possible to the version that J.R.R.

Tolkien intended.Also included is the original red and black map of the Shire and - for the first time - a special plate section containing the pages from the Book of Mazarbul.

This 50th anniversary hardback features Tolkien's original unused dust-jacket design, which has been reworked to celebrate this special anniversary.